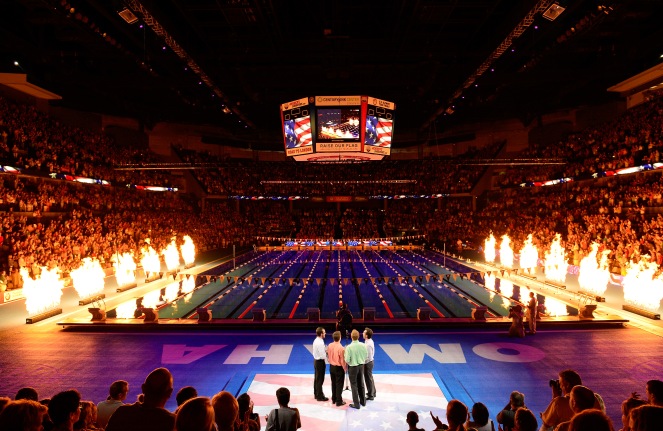 There’s no question that the US Swimming Olympic Trials is one of the most exciting swim meets on the planet.  The depth of talent, and the fierce competition between truly world class swimmers is staggering.  Add to that the heartbreak of watching previous champions miss the team, and the sheer joy of watching new Olympians being made.  It’s a meet like no other.

But behind all this excitement and emotion there’s the real question of the strength of the 2016 Olympic Team.  Will they do as well as their stellar performance of 2012? And how will they fare against a truly impressing looking Australian team.

There are many ways of determining strength.  Given our obsession with Gold, it’s a fairly easy job of just counting up the top ranked country in each Olympic event to come up with a simple prediction of Olympic Gold.  And here it is.

If this data is at all accurate, then it looks like Australia will run away with the gold medals in this Olympics.  Their 9 #1 rankings is more than twice the 4 for the US. Hungary also has 4, while Japan has 3.

But we all know that this method is far too simplistic. Winning a gold involves far more than being the top seed. There are many top swimmers who will only carry out their full taper for the Olympics, as they know they don’t have to give it 100% for their national trials.

So the next idea is to broaden the search to the Top 5 in each event.  While this is still no guarantee that we’ve captured the top swimmers, at least we have a larger number of data points to work with.  And to make things more interesting, I compared the Top 5 going into the 2016 Olympics with the Top 5 going into the 2012 Olympics.  (See the Note at the bottom of my post for my unorthodox way of estimating the 2012 data.)

Here’s where it gets interesting.

Notice that the US women have declined significantly in Top 5 rankings compared to 2012, and yet they remain a strong team. However, they now have one fewer Top 5 ranking than the Australians, despite having twice the Aussie count before the 2012 Olympics. By all appearances, the Women’s races will largely be a competition between Australia and the US, with Hungary a distant third.

The US men’s side is a completely different story. While they were far ahead of all other countries in 2012, they are even farther ahead of them in 2016.  In fact, the US men with 19 Top 5 rankings have more than Japan and Australia combined, with both of them having 8 each. This data suggests that it will primarily be Japan and Australia fighting for the remaining medals.

My next step was to do a direct comparison between the 2012 and 2016 US teams, and specifically to compare winning times in each event.

You can see here that there are 4 men’s events and 5 women’s events (numbers in red) where the 2012 Olympic Trials winning time was faster than the 2016 winning time. I don’t have historical data on this, but I strongly suspect that for a sport that generally achieves faster times year after year, this is surprising.

I then came up with a novel way of calculating a single value to determine the speed of the Trials for each gender.  I took the 100 time for each event (double the 50 winning time, halve the 200 time, divide the 400 time by 4, etc) and then averaged those 13 times for each gender .

Here’s where the surprises start coming.

The numbers for the women are a little more encouraging.  They have a 0.29% improvement since 2012.

But the problem here is that this just looks at the US in isolation.  So I then applied this technique to the 2011 and 2015 World Championship winning times, just to see how much World times were changing. NOTE: I only used Olympic events to generate the 100 Average value.

And here’s where we get a shocker.

The Women’s World times, however, improved by a massive 0.77%. And this means that the US Women’s Trials improvement of 0.29% has them falling behind the rest of the world.

Of course, none of these analyses really matter.  All that counts is how people swim in that huge pressure cooker at the Olympics.

Other Random US Trials Observations

Overall, the US appears to be poised to win a considerable number of medals, with the men in a stronger position than the women.  However, the lack of #1 rankings means the men will have to step up their game if they want those medals to be gold.

The US women appear to be weaker, relative to the rest of the world, than they were 4 years ago.  Katie Ledecky aside, medals of any colour may be harder to obtain.

NOTE:  I spent quite a while searching for accurate rankings immediately prior to the 2012 Olympics. I couldn’t even find the heat sheets or psych sheets for London, although many promising links turned out to be dead.  However I did find Olympic race times that also gave the lane and heat. So I used standard circle seeding to identify the swimmers with the fastest 5 entry times.

5 thoughts on “Swimming By The Numbers: How Strong is the US Olympic Team?”