There is no doubt that swimming in the 1970s was exciting. Goggles had just been introduced in the late 1960s, and this allowed swimmers to train as hard as their bodies would allow, instead of training as hard as their eyes would let them. As a result, swimming records of every kind were broken on a regular basis. But along with the records came a flurry of previously unknown or rare overuse injuries, including swimmer’s shoulder, breaststroker’s knees, burnout, overtraining, etc. It was a very dynamic time.

Here are 6 things I really don’t miss about those good ole days.

These shirts became popular in the 1970s for a short time. They’re similar to the occasionally seen drag suits that have pockets held wide open to increase the drag (ex. Finis Ultimate Drag Suit here). However, while drag suits are partially hidden by the body, the pockets on the drag shirts were positioned to maximize the amount of increased drag. And it did it to a scary degree. Swim speeds slowed down to a crawl, while putting huge stress on the shoulders. As such, it didn’t last long in the marketplace. Using it for one year probably hastened the end of my swimming career by a year or two.

Doping on a large scale started in the 1970s. The East Germans and their state-sponsored doping program lead the way, but there were plenty of signs that many individuals in many countries and many sports were doping as well. The results were just too tempting, and the testing was too primitive to be effective. The devastating health repercussions we later saw in the East Germans athletes is heart breaking (see my post here).

With the new awareness of Shallow Water Blackout, this isn’t done anymore (hopefully!), but until the last decade or so it was done all the time. I remember many incidents when my fellow swimmers would black out underwater, and someone would have to save them. It was just considered all part of the training at the time.

Many top swimmers in the 1970s had moustaches. It was just part of the culture of the time, with Mark Spitz (seen above) leading the way. We really don’t see moustached swimmers anymore (and other than Spitz, this may be a good thing!) 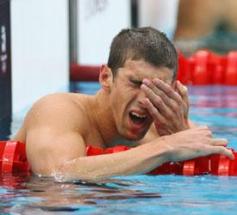 As goggles were still new, they weren’t always that reliable or comfortable. As a result they had a tendency to fill up with water, or just plain fall off during dives. A few of my coaches prepared us for this by making us swim sets without goggles. And swim those sets HARD. But I swear that kids these days think that opening their eyes underwater will cause instant blindness. I recently told my Junior and Senior level swimmers to take off their goggles and swim a 200. After all the moaning, I saw them run into each other, the lane ropes, the walls, and reach out blindly for a wall that was still 5 metres away (it really was hilarious to watch). Only a few brave swimmers actually opened their eyes underwater. And yet goggles continue to malfunction at key moments in races these days (watch Phelps swim the 200 Fly Final in Beijing with goggles full of water)

Sure, results at your meet were available right away. But if you had a competitor in a meet on the other side of the country, you’d have to wait days or weeks to find out their times and placings. Often you wouldn’t find out until the next swimming magazine came out.

Now, to balance this, the 1970s had some pretty good things as well.

We did this all the time when I was growing up. The fundamentally different movements of swimming strokes feet-first taught us how to feel the water. It also used opposing muscles, which is always a good thing. Other than giving it to my swimmers, I rarely hear about it this approach any more. See a YouTube video here.

Back then qualifying times were set for big meets so that swimmers could actually get a decent warmup. In a big meet, such as national championships or trials, there would typically be 500 or so swimmers. The 2012 US Olympic trials had 1850 swimmers. No matter how many pools you have available, that’s a mess. Just last week we recently went to a provincial championship with 830 swimmers in the session. That’s just too many to warm up properly.

I was coaching a morning swim practice the other day and saw one of the swimmers in the public lanes do a backstroke touch flip turn. For you young ones, that’s where you touch the wall while on your back, and then flip to push off on your back again. To do this quickly, the timing has to be incredibly precise. With today’s backstroke flip turns, precision is gone. It’s too bad: those turns really were a skillful and important part of the race.

OK, reminiscing about the good ole days is over. Back to work.