I know this is a provocative title, but it’s a serious question. I often get approached by parents asking if their relatively short child has a future as a swimmer. And of course I say yes, because every swimmer should strive to reach their potential. But there is a deeper question buried in there. Can a short swimmer successfully compete at the highest levels?

The bottom line is that the truly elite swimmers have almost every possible performance factor going for them. Not just height, but toughness, discipline, technique, resiliency, competitiveness, body proportions, etc. And they have a team behind them that provide the best coaching, nutrition, sports psychology, emotional support, etc. But since no swimmer is superior in all areas, it opens the door to swimmers who have one or more factors that aren’t optimal.

This is where short swimmers come in. While being short is a serious handicap, this can be more than made up with very hard work, great technique, killer attitude, and some genetic luck in terms of body proportions, superior adaptation to training, joint resiliency, etc. A height disadvantage can be overcome. An inability to work hard, or pay attention, or bad technique usually can’t be.

It just so happens that we currently have two examples of outstanding short swimmers.

Kosuke Hagino of Japan is arguably the top male swimmer in the world. He recently medalled in all 6 individual events he swam at the 2014 Asian games, including 3 gold. This included beating out Olympic champions, and recording times that put him at the very highest levels in the world in some races. Kosuke is 5′ 8 3/4″ tall. While not exactly short by public standards, in the swimming world that is considered very short.

Katinka Hosszu of Hungary was recently named the 2013-14 Arena Grand Prix Series winner, with 10 victories in the Grand Prix series and far ahead of second place. Katinka is 5′ 6 7/8″ tall. Again, this may be considered a reasonable height by public standards, but in the swimming world this makes her one of the shortest elite competitors out there.

So, how prevalent are short swimmers in the top ranks? In order to determine this I looked at the heights of the finalists of 7 different men’s and women’s races at the London Olympics. I picked somewhat arbitrary heights as being indicative of a short swimmer. Here’s what I found.

Just over 10% of the male finalists in these 7 events were 5′ 10″ or shorter, and almost 20% of the female finalists were 5′ 6″ or shorter. Again, neither height is short by public standards, but certainly short by swimming standards. And it shows that short swimmers are really not all that rare.

Next, I looked at the variations in average finalist heights for the different events. Here’s what I found. 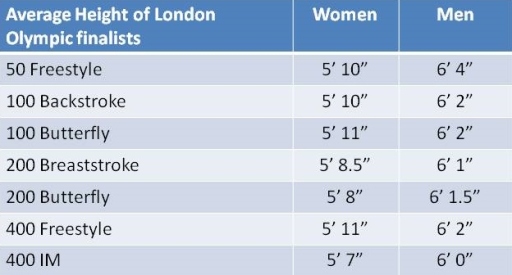 Based on this, we can see that average heights are taller for sprints and freestyle events, and slightly shorter for 200 Breaststroke, 200 Fly and 400 IM.

Until recently, I thought that was pretty much the story about short swimmers. Elite short swimmers were a little uncommon, tended to focus on longer events, and they had to be much tougher than their taller peers. But then the Swimming Science site published an excellent article (here) by Tiago M. Barbosa about the energy expenditure of the top 3 finishers in the Men’s 200 Free at the 2014 Asian Games (see picture at the top of this post). It blew my mind.

This article examined the estimate energy expenditure for each 50 split for the winner Kosuke Higano of Japan, silver medalist Sun Yang of China, and bronze medalist Park Tae-Hwan of Korea. This table illustrates the results.

Notice that the much shorter Hagino expended far less energy in winning the race over his much taller opponents. In fact he only expended 75% of the energy used by the much taller, silver medalist Sun Yang. In this particular case, being smaller resulted in not having to move as much mass through the water. A distinct advantage for a small swimmer.

The story gets even better for short swimmers when we move below the elite level. These swimmers typically have a number of factors negatively influencing their performance. A short swimmer who excels at most other factors can be expected to be far more common.

Bottom line – being a short swimmer doesn’t mean you can’t compete against taller competitors. But it does mean you’re going to have to work much harder, have better technique, and pay more attention to all the things that influence performance. Those are all things you can control. Oh, and you may want to stay away from those sprints and look for longer distances.

69 thoughts on “Can Short Swimmers Compete at the Highest Levels?”