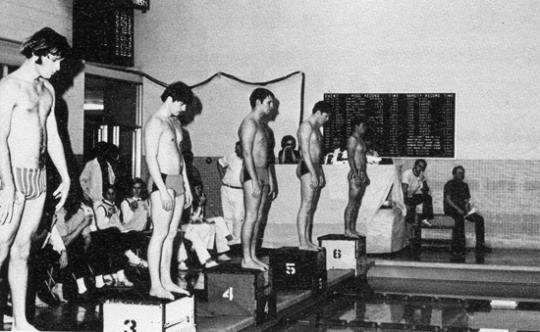 One of the nice things about being a both a swim coach and former swimmer is that I have a perspective on swimming that was not available to me when I was a just a swimmer. Two things stand out for me as significantly different back in the 1970s as compared to now.

Back then, swimmers just didn’t survive nearly as long as now. With very few exceptions, you were done swimming when you finished university, assuming you even lasted that long. It was almost unheard of to still be swimming in your mid-20s And this wasn’t because you had to work for a living and had no time for swimming; it was because of the training excesses of the time. At my peak I swam 13 practices a week, totalling 30 hours in the water. I can remember my longest practice being 15,000 m, and weekly totals were regularly over 100 km. But in addition to our swimming workouts we had up to 10 hours of dryland a week, including a daily requirement to do 500 “pulleys” (the equivalent of cords today). Our coach used to tell us that we had a day off, because we finished our 3-hour Sunday practice at noon, and didn’t swim again until 5:30 Monday morning. According to him, that’s a day!

For those whose bodies were magically resilient enough to withstand this rigour, we improved at a tremendous rate. But this improvement came at a cost, and that cost was that our bodies gave out far earlier than today. Shoulder tendonitis was rampant, as was chronic over training and knee problems (breaststroke). Thankfully, our training regimes today are more scientific and balanced, but I still cringe when I hear of some clubs ramping up the distance.

We had a fundamental understanding that Canada was among the elite swim countries in the world. This was more than an expectation, it was a reality. Here’s one way of explaining it. At the 1976 Montreal Olympics, the Canadian swim team won 2 silver and 6 bronze medals. Only the US, East Germany and Russian won more medals. Those are impressive stats by today’s standards. In fact, I had a teammate who placed 4th in our Olympic trials in the women’s 100 m backstroke and didn’t make the team, but would have easily made the US Olympic team. She had a good chance of making the Olympic final. We were good!

But we were far more successful than even those totals would indicate. Officials from former East Germany have fully admitted to their massive doping program during the 70s, meaning that the incredibly successful East German team was cheating. If there was any sanity in the world, the doped East Germans would be stripped of their medals, with new medalists announced. For no apparent reason, this has not happened. But if it did, Canada would have won 3 gold, 7 silver and 3 bronze for an astounding total of 13 swim medals. Including a sweep of the Women’s 100 m Backstroke event!

And now, in no particular order, here are other thoughts about swimming in the 70s.

We had all of the usual ones, kickboards, pull buoys, paddles, etc. But we had some horrible ones that thankfully don’t see much use these days. By far the worst one in my mind was the pocket drag shirt. These shirts were worn while swimming, and had open pockets all over chest and back, with plastic inserts in each pocket that bowed open. They added so much resistance that speed was slowed enormously, and all the extra strain was taken on the shoulders. Wherever they appeared, shoulder tendonitis soon followed.

Another one that I hated, and still makes a rare appearance these days is the tubing harness set up so that you have to swim hard and stay within certain area marked on the bottom of the pool. You swim as hard as you can and try to hold your position as long as you can. If you think watching a black line on the bottom is mind numbing, try watching a black line that isn’t moving! To me, it sucked every bit of joy out of swimming.

With advanced materials out of the question, swim suits were tiny, made of a paper-type material, and not overly stretchable. Similar to today, we typically wore suits 4-6 sizes smaller than our training suits, except these things were tiny. I still cringe when I think about how tight they were. Hmmm, I guess this really hasn’t changed all that much after all.

I’ve blogged about how goggles revolutionized swimming, and perhaps nothing said this more than swimming in the 70s. With swimmers training (stupidly) harder than ever before, age group records, national records, ALL records were up for grabs. We just got used to it. I hate to say it, but we thought we were just far superior as athletes than the swimmers before us. Now I know better. But that conceit might be a part of every new generation of swimmer. In any case, every big meet had a slew of new records. The best part is that when swimmers are not in awe of records, they don’t perceive there are limits to what can be done.

There was a whole different attitude towards safety and responsibility. I can remember training in a 55-yard pool (and yes, there were records at all levels for this pool type) with a very shallow starting end (I recall it was 3-4 feet deep). When we had meets at this pool our coaches and the officials would tell all the swimmers not to dive deeply at all or we’d hit the bottom. Many times during the meet someone would dive too deep and come up with bleeding arms, or legs, or even faces. And we would get yelled at by the coaches and officials for diving too deep. It would never have occurred to us to blame someone else.

We also regularly did extensive underwater repeats, and it wasn’t all that unusual for swimmers to just go unconscious. I personally saw this happen quite a few times. Coaches were quick to react, but still… I’m very happy that we now know more about the dangers of these shallow water blackouts. Back then, it was just considered something to watch out for.

We swam differently than our present generation, and this was partly due to the rules, and partly due to the immaturity of our sport. As an example, for a period of about 10 years we were taught that for freestyle our hands should pull in an exaggerated S-shape. There were a lot of theories and “proofs” about how the hand could act as an airplane wing and provide lift during the pull. This was eventually disproven, but mainly through superior performance by swimmers with straight line pulls.

We also didn’t know about underwater, so our turns consisted of pushing off (or diving) and then immediately swimming. Not even a hint of underwater. It never occurred to us.

We had to touch the wall on our backs before doing a backstroke turn. If you want to have fun, get your kids today to try to do this quickly.

The head was not allowed to go underwater during the breaststroke recovery. This was a much bigger deal than it sounds, as a portion of the head needed to be above the water at all times after the pullout, and this includes being above the bow wave in front of the head. Some swimmers took to wearing 2 caps, with extra air trapped in the second one. The other strange byproduct of this rule was it determined the size and shape of the top breaststrokers. You either needed to be incredibly light so that you stayed very high on the water, not unlike those water striders bugs that never seem to get wet, or you needed to be phenomenally strong to bull your way through the water. So the top breaststrokers tended to be either 13-14 year-old prepubescent girls, or much older and incredibly strong and bulky guys. Not a lot in between.

Anybody else have any recollections of swimming in those years? 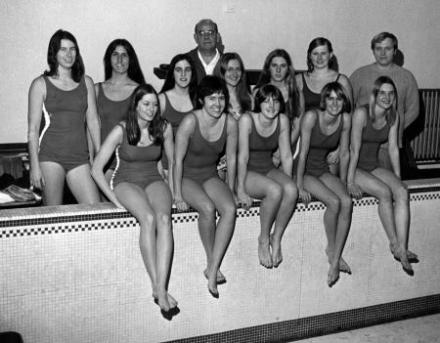 14 thoughts on “How Has Swimming Changed? Swimming in the 70s”