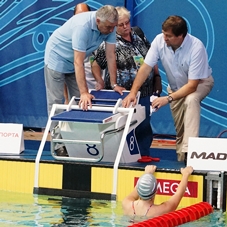 In keeping with my “More Than You Want to Know” series, I’m including some backstroke and backstroke start history. But take a look, there’s some fascinating stuff and some really old Olympic backstroke videos.

After that we’ll discuss the new backstroke starting systems.

in 1896, the only events offered were freestyle (100, 500 and 1200 metres), plus a very questionable Men’s Sailors 100 metre freestyle open only to sailors in the Greek Royal Navy. Only three sailors ended up competing, guaranteeing them all with official Olympic medals.

Backstroke debuted in 1900 Olympic Games, with only the 200 metre event. This race was won by Ernst Hoppenberg of Germany, with a time of 2:47.0.

Now before you start laughing at that time, I should point out that backstroke was still new at that point, and was basically breaststroke done on your back. That’s right, it was like double arm backstroke but with underwater recovery and whip kick. Hoppenberg not only won by 9 seconds, but he finished more than a minute ahead of 8th place. And 2 swimmers in the 10-person final didn’t even finish. So that time is not too bad at all. For you swimmers out there, try a 200 m and see how fast you can go.

As an aside, the 1900 Olympics was also the one and only time a swimming obstacle course race was offered. The 200 m race involved climbing over a pole, then over a row of boats, and then under another row of boats. We HAVE to reintroduce that race!

It wasn’t until 1910 that backstrokers started to use an overarm pull and flutter kick, which is more or less the same stroke we use today.

In 1922, Sybil Bauer (picture below) of the US became the first woman to break an existing men’s swimming world record in the 440 yard backstroke. Her time of 6:24.8 was a full 4 seconds faster than the previous record. (Yes, that’s right. 440 yard and 400 metre backstrokes were real events back then)

The earliest Olympic video I could find of backstroke is the 1936 women’s 100 m final (here). It’s interesting to note that the winner Nida Senff of Netherlands completely missed her turn. She went in to the wall first and did a weird, splashy swivel turn without touching the wall. She then had to reach out to touch the wall, losing 2-3 body lengths. See, champion backstrokers had problems with walls even back then!

What’s most interesting about that race though is the start. While they had starting blocks, there were no hand holds. As a result, backstrokers started holding on to the lip of the pool.

Our next video is from the 1952 Olympics 100 metre backstroke for women (here). We can see that backstroke holds were available, and were used. The oddest thing about this is that all competitors brought their heads pretty much right to the block, then jumped back with a huge splash. However, watch lanes 3 and 4. They go underwater until after the flags.

And lastly, the 1956 Olympics 100 metre backstroke for women (here). You have to be quick to catch the start, but notice the more powerful push, arched backs, and very little splash. These starts are much faster. What a difference 4 years made.

As we can see, from 1956 until the present day, the mechanics of the start have not fundamentally changed.

If you’ve been involved in swimming for any period of time, you’ll know all about the special problems that backstrokers have. Instead of starting on a specially-coated non-skid starting block, and recently provided with a wedge to increase power, backstrokers start in the cold water on aging touch pads or tile-lined end walls. And while slipping on the block is almost unheard of for those top-of-the-block starters, it’s far too common in backstroke. Even at the highest levels.

Here’s an example. Elizabeth Beisel is one of the fastest backstrokers in the world, and qualified first for the 200 backstroke finals at the 2014 US National Championships. You can see it here (race starts at 2:36). Beisel, in lane 4 completely slips off the wall, taking herself immediately out of the race. An underwater shot of the start can be seen at 5:35.

While this was very unfortunate, it isn’t at all unusual. It’s happened in the Olympics, World Championships, and every other meet in the world. And has happened to every backstroker in the world.

In other words, a system to address this universal issue is a long, long time coming.

FINA worked with Omega and Myrtha Pools to develop the system. It uses the grooves of their existing starting platform wedge system to hang a stainless steel bar into the water.

And here’s the Myrtha Pool system. 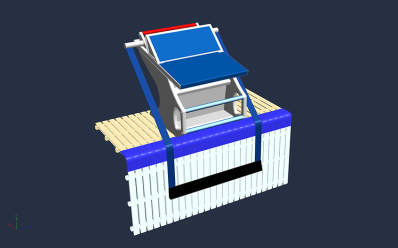 Briefly, both systems allow a horizontal bar to hang down into the water. 5 possible heights are allowed, from 4 cm below water level to 4 cm above water level, in 2 cm increments. The bar itself is 8 cm high, and has a 10° slope to a maximum of 2 cm out from the wall or touch pad. The toes of both feet must be in contact with the end wall or touchpad. The system is actually pretty simple.

Testing of the system started in the summer of 2013, with tests at the US, Russian and Turkey National Championships (and probably others). Initial reports were fantastic, with virtually everyone trying it saying they loved it and never wanted to do another backstroke start without it again.

However, testers at both sites commented on the inordinate length of time and amount of energy it took to install and set it up. One tester pointed out it took well over a minute, and involved “more effort than a swimmer should exert”. This issue has been cleared up when FINA put out a ruling saying that only official can install and remove the systems.

FINA and Omega subsequently partnered to produce a demonstration video of the system (here).

But recently other issues have come up. A recent open letter to FINA (Nov. 11/14) (here) questions FINA’s focus on the Omega starting system, which doesn’t work with pools with water-level end walls. In fact, neither does Myrtha Pools who also worked on early versions of backstroke start systems. The letter author, Shirley Gustafson, is a representative of Spectrum Aquatics, and she points out that FINA’s ruling only allows for devices that work on end walls that rise above the water. She guesses that “… 90%+ pools in the US do not have this kind of wall configuration.” She further points out that the range of feet placement is very limiting (from 4 cm below to 4 cm above water level), and may not accommodate people who want a lower placement.

Gustafson has a point. The FINA ruling is promoting a backstroke starting system that only applies to a relatively small percentage of pools, and definitely seems to favour two specific companies. Since those initial FINA technical committee meetings, Spectrum Aquatics and Colorado Time Systems have developed systems that work with water-level end walls (and look identical), but cannot provide options of having the wedge bar above water level. These systems also automatically retract after the start, negating the need for a timer to move it out of the way. Here’s a pic. 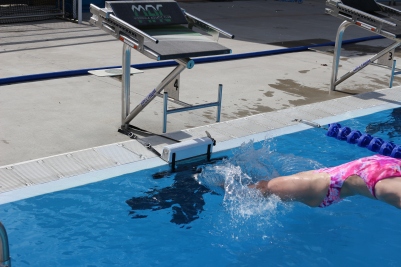 So what are the Pros and Cons of this new backstroke start system? Keep in mind that many of the Cons will probably be answered over the next few years as additional experience and fine tuning improve the system.

There are two particular aspects that need to be addressed.

1) Officials need to remove the Omega / Myrtha Pools starting system once the race has started, and before the swimmers return to that wall.

This completely changes the nature of a swimming event. Prior to this, no extra actions have ever been required by any official during the course of a race, other than timing. We all know that sooner or later, an official will forget to remove the starting bar. Here are some concerns for when that happens.

However, FINA seems to have adopting one particular type of system, financially benefitting only a few manufacturers, and ignoring a very large proportion of the pools out there. They need to address this point.

Additionally, there are some further questions related to situations where swimmer safety, and official times are concerned. This should be addressed as soon as possible.