If you’ve been involved in swimming for any period of time, you know about the shaving tradition. This is where swimmer at big meets often shave virtually all available skin not covered by a bathing suit, with the exception of the eyebrows. Normally this includes arms, legs, torso, and sometimes even the head. The loss of the hair should result in some amount of improved hydrodynamics.

But one of the realities of shaving is the incredible feeling in the water. And this comes from the fact that shaving doesn’t just get rid of just the hair. It also gets rid of a layer or 2 of dead skin cells from the epidermis. The exposes newer and far more sensitive skin cells, and this is responsible for that incredible sensation and feeling of speed when racing. The added sensitivity literally has the swimmer feeling like they are moving much faster through the water.

Of course, non-swimmers don’t understand any of this, and male swimmers usually take some ribbing from their non-swimming friends. But with performance improvements of However, shaving has been reported to improve swimming performance by up to 3-4%. That’s a huge amount.

Although historical records about swimmers shaving are sketchy, the first mention I could find was of Jon Henricks of Australia at a meet in 1955.

At the Melbourne Olympics the next year, at least one other Aussie, Murray Rose, also shaved. At those games they not only gained a lot of attention with their shaved bodies, but the Australians also won 5 of the 7 events. 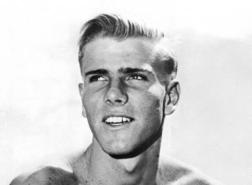 Interestingly, the Americans didn’t think the shaving had anything to do with the Australian success, believing they were just being strange.

The two Australian Olympic stars, Rose and Henricks, then brought the practice of shaving with them when they arrived at USC in 1957, and the practice caught on quickly in the US. By 1960, most US swimmers were shaving for the Olympics, and the rest of the world soon followed and never looked back.

The one hiccup in the use of shaving came with the high technology swim suits of the mid-late 2000s. These suits covered most of the body including virtually all of the legs, drastically reducing the need to shave exposed skin. However, the subsequent ban on those suits, and limitations in suit sizes brought shaving back to the forefront again.

Does Shaving for Swimming Work?

YES! There is no doubt about that, based solely on swim performance. But not a lot of scientific work has been done to explain why it works. Three of the best studies are as follows:

Sharp, Hackney, Cain and Ness (1988) did a two-day study of 6 swimmers. 4 x 200 descend each day with the swimmers shaved on the second day. Blood lactate levels for maximal speeds dropped by 23%. the main criticisms involve the small sample size and the possible interference from back-back lactate sets.

Sharp & Costill (1989) tested the impact of shaving on swim performance, specifically during breaststroke and streamline. The tests indicated that shaving lowered blood lactate levels and oxygen consumption, and resulted in longer stroke length when compared to the control group. However, this limited study didn’t account for many important variables, and equated passive and active drag.

Indiana University Counsilman Centre conducted a study aimed at exploring the physical effect of shaving on the perception of cutaneous sensation. Sensation perception was tested before and after shaving with and without wind blowing across the skin. Results showed that shaved skin required only 40% of the wind force for perception when compared to pre-shaved skin. In other words, shaved skin is far more sensitive.

But how does more sensitive skin help? 2 theories were put forward.

I’ll suggest another one.

Which Factor is the Most Important?

Let’s start with looking at the science behind another sport that uses shaving for performance benefits. Cycling. Cyclists shave for a number of reasons, including performance, better massages, and even lowered risk of infection with road rash (wiping out and sliding along the concrete). But the biggest benefit appears to be related to improved aerodynamics. Various wind tunnel studies carried out by bike manufacturer Specialized have shown performance improvements of from 50 to 82 seconds for a 40 km time trial. That’s huge. (Another smaller study found an improvement of only 5 seconds)

But does this hold for the significantly different biomechanics and fluid dynamics for swimming as well?

Cyclists typically ride at 40 – 60+ km/hr. At those speeds, any improvement in aerodynamics will have a huge impact. But keep in mind that the benefit in cycling is 50-80 seconds in a race that takes up to an hour. That’s a benefit of roughly 1 second per minute of racing at very high speeds. That results in a performance benefit of roughly 1.7%, or significantly below the anecdotal but pervasive quoted swimming performance benefits of 3 – 4%.

Lastly, there are definitely some dos and don’ts regarding shaving.

Rather than me reinventing the wheel, you can find a great site that discusses how to shave here.

And here are some other things to keep in mind.

DO have a shaving partner. Shaving all of your body causes a lot of contortions and awkward body positions. The last thing you want to do is pull a muscle trying to get into that last awkward position. You may need that partner to shave the hard to reach places

DO shave the palms of the hand and the soles of the feet. While there are no hairs there, you’ll still be removing dead skin cells and improving your feel for the water.

DO reshave every day during the meet. Skin cells desensitize quickly. But avoid shaving with the grain as this can cause ingrown hairs.

DON”T use a skin lotion after shaving. This can actually clog and close the pores, reducing the very sensitivity you are trying to achieve. Instead, use rubbing alcohol. The opens the pores and increases the sensitivity, while also sterilizing any cuts you may have incurred.

DON’T shave more than 2 times per year. In order to get the best effect from shaving, the newly exposed skin need to have time to age and die resulting in desensitization. Only after that will shaving have a significant impact again

DON’T start shaving until at least high school age. Shaving can introduce pressure and expectations that are inappropriate at younger ages.