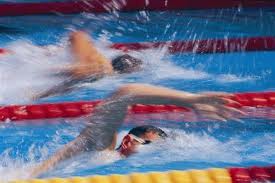 If you’ve spent any time in swimming, you’ve probably known a drop-dead sprinter or two.

Now, I’m not talking about a normal sprinter who can do a fast 50 or 100, but trains pretty much like everyone else. I’m talking about a sprinter who can do a blazing fast 50 or 100 in a meet or in a practice, and that’s about it. They can’t do main sets properly because there are just too many lengths involved, and their muscles just can’t keep on working like that. (Gary Hall Jr. springs to mind.) 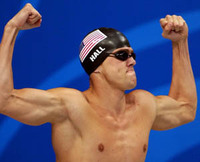 The issue is that drop-dead sprinters are not physically like the rest of us, and the difference occurs within the muscles. The average person typically has a little less than 50% fast-twitch and the rest slow-twitch muscle fibres. Fast-twitch fibres [FT] can contract in less than half the time of slow-twitch muscle fibres [ST], allowing for far more explosive strength. The problem is that this also means that athletes with a high FT percentage go through energy far faster than other athletes. Meanwhile ST contract slowly, require little energy, and drop-dead sprinters don’t have a lot of that.

Not surprisingly, different sports attract athletes with extremes in FT. Elite running sprinters have up 85% FT, which makes sense as they have purely anaerobic races, while elite marathon runners typically have about 25% FT. Swimmers, with no purely anaerobic events and lots of very aerobic events, tend to have a range of FT from just over 50% to down to 33% according to one study. 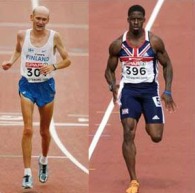 And this brings us back to swimming’s drop-dead sprinters. Their FT will probably be 60%-75% FT, meaning they can go fast, but don’t have a lot of ST to enable them to go slow. Basically, in a typical swim practice, they just run out of energy far before anybody else.

Unfortunately, other swimmers and even coaches often view this behaviour as being lazy. Drop-dead sprinters violate the principle inherent behind every practice. The only way to get fast is to train long and hard. A common refrain is, “Just imagine how good they’d be if they just trained hard!” And here’s the problem. Most coaches try to train drop-dead sprinters as if they were normal swimmers. And the result is predictable: the swimmer quits either through injury or frustration, or the coach kicks them off the team.

David Epstein discusses this concept in “The Sports Gene”. He talks about Jesper Andersen and his work researching the muscle fibre types of Danish professional soccer players. Andersen determined that the most of those tested had fewer fast-twitch fibres than an average person, despite speed being one of the most sought after qualities in the game. Further work lead him to discover the reason.  At developmental levels, all players are trained exactly the same, and this lead to the FT players getting injured all the time from the workload. Injury-prone athletes just don’t make desirable professional soccer players. Andersen’s solution: don’t train all players the same.

So what are the problems with adopting his solution, and train high-FT swimmers differently than the rest?

Those are not trivial problems. What each coach has to face is whether those problems are worth the benefit of having a blazingly fast swimmer on the team.

5 thoughts on “The Troubled Life of a Drop-Dead Sprinter”