In watching the 2019 World Swimming Championships, I was struck by the apparent wide range of countries that were making finals and even medaling. And, of course, I was extremely surprised at the complete absence of US swimmers in either of the 200 FR finals. Some of this was no doubt due to the sickness going through the championships, but that just fed my feeling that international parity must be soaring.

And this, of course, lead me into what turned out to be a massive statistical analysis. The bottom line: a little less international parity, and the US is approaching a low point in their performances at the World Championships.

This analysis covers the last 9 World Championship, from 2003 to 2019. Each Championships included 17 individual events for each gender. I only considered individual events as this gives a better indication of each country’s swimming performance. The top swimming countries in the world have so much depth that they can be swimming well off their best, and still qualify a relay team into the finals.

I first looked at the # of men’s, women’s and total finalists for each of the 9 World Championships from 2003 to 2019.  I broke it down into as follows: USA; then combined the next 9 countries in terms of # of finalists (‘2 to 10’), and combined the rest of the world (‘The Rest). (NOTE: the maximum possible number of finalists is 34 for each gender (17 events x maximum 2 entries).

In general, if the # of finalists for the rest of the world increases, then we’re seeing more international parity.

Here are the results:

So which group did well? Those curves show that the countries ranked 2 to 10 in # of finalists have been trending upwards for quite a few championships. In fact, 2 to 10 reached the highest levels in all three categories (Men, Women, Combined) for the whole 16-year range of the analysis.

Another interesting thing to note is the effect of the tech suits in the 2009 World Championship. Countries not in the top 10 hit their highest levels of # of finalists in 2009 compared to the 2003-2019 range of this study. It’s easy to speculate that the impact of the tech suits made it easier for less successful swimming countries to compete with the rest. However, we may never truly know.

Here’s a graph focusing on just the # of finalists for The Rest countries, concentrating on Men vs Women. 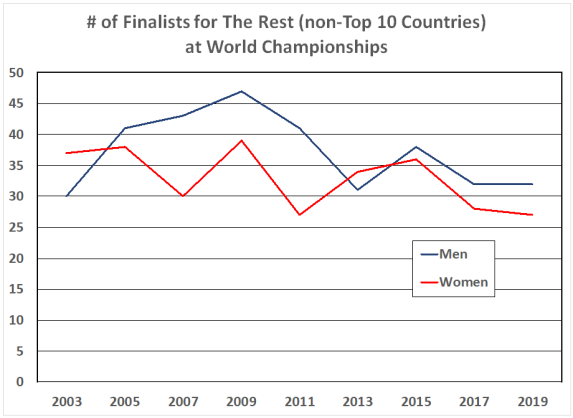 The interesting thing about this graph is that it shows that, other than 2003 and 2013, the Men had significantly more finalists than the Women, indicating that Men generally have more international parity than women.

# of Countries with Finalists

As I usually do, I like to find another way of analyzing data to see if the conclusions hold. In this case, I looked at how many countries had finalists, even if they only had one. This is another way of assessing parity. The more countries in finals, the more even the playing field is becoming.

Here I showed the numbers for Men, Women and Combined.

Notice that for men, women and combined the # of countries with finalists dropped from in 2019 from previous years, although the 2019 numbers are fairly close to historical averages.  We can also see that the women have less international parity than the men.

One of the reasons I like to analyze finalists is that they provide more than twice the data points of analyzing medalists. That gives us more confidence in the results. But it’s still interesting to carry out a podium analysis. 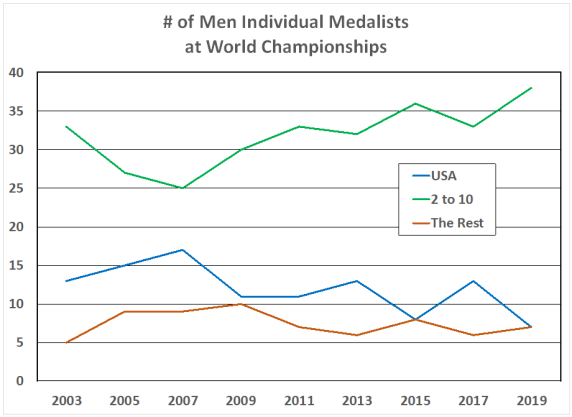 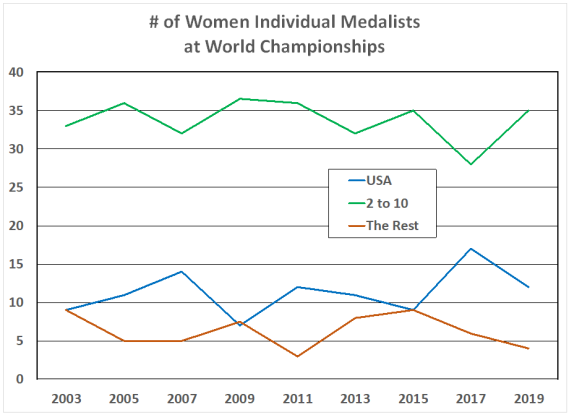 These graphs pretty much echo the results of the analysis of finalists. The US won fewer medals than 2017 in all 3 categories, and the men hit their lowest # of medalists in this study. The US women here were a bit of an anomaly in that they had a decent # of medals, even taking into account Katie Ledecky’s illness.

Also echoing the analysis of finalists, Countries ranked 2 to 10 improved quite dramatically for the Men and Combined curves, hitting clear all-time highs.

Lastly, the # of medals for The Rest are generally at low levels in 2019.

Here’s the graph showing the # of countries with medalists.

This graph echoes our general observation of less international parity. The # of countries with medals dropped for both women and combined, although it rose from an all-time low in 2017 for men.

With so few data points, an analysis of gold medals is done mainly out of curiosity. In fact, there are so few gold medals (17 for each gender) that there’s no point in even doing the analysis showing results for USA, 2 to 10 and The Rest.

Here’s the graph showing # of Countries with Gold Medals. 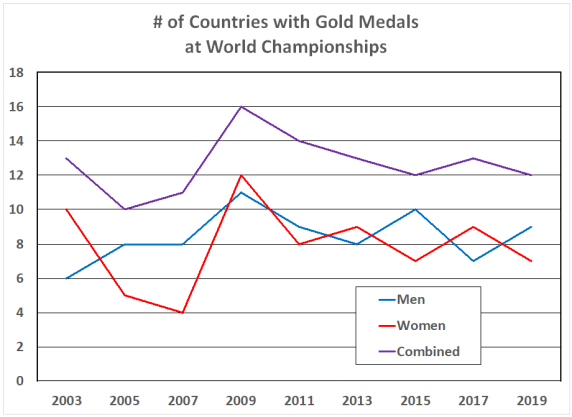 The things that strike me the most about this graph are the peaks in 2009 (tech suits), and the gradual decline in # of countries with Gold Medals since 2009.  Only the men show an uptick for 2019.

This analysis indicates the following:

For those who are interested, here are the rankings for 2019 for Top 10 countries

# of finalists – Combined Men and Women