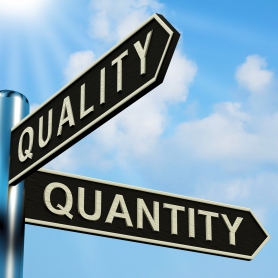 I know this is an age-old question, but it became fresh in my mind this week when one of my swimmers asked me why we weren’t doing the high mileage that so many other clubs are doing. As I explained to him, our philosophy is to prioritize technique and race pace over lengthy but slower sets. In effect, to emphasize speed and speed endurance over endurance.

However, and here’s where discussions start, there are many incredibly good swimmers who came out of heavy mileage programs. In fact, this old school slant towards heavy mileage has never really left us. There are legendary sets out there that amaze anyone who sees them. Sets like 200 x 100 or 50 x 400 shock us and excite us as we contemplate how incredibly tough those swimmers must be. And yet it begs the question: Does heavy mileage really improve our swimming speed? Considering that most swimmers specialize in 200s or less, it’s hard to imagine that an aerobic set lasting for hours can significantly affect an events lasting 2 minutes or less.

There don’t appear to be any definitive answers for this. So as some swimmers look at massive sets with envy, I’m faced with the task of trying to explain our emphasis on speed and speed endurance, mixed with lots of technique work. In fact, even now I think back with some sense of bizarre pride to the monster sets that I did when I was a swimmer. And then I think back to how my shoulders gave out and I had to leave the sport far too early. How do I explain this to a teenage boy who feels immortal and sees stardom in his future?

All that I could say is that in very wide range of training philosophies, ours leans towards less mileage and more quality. And then point out how well he has done in our system. But I could still see in his eyes that he thinks he wants to do massive sets. I remember having that same feeling when I was his age. Right up until I had to quit.

12 thoughts on “Quality versus Quantity”