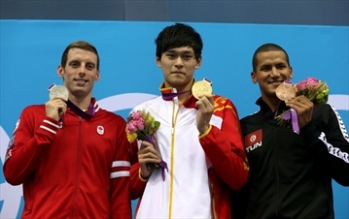 This last Thursday, Brett Wilson wrote an interesting and controversial article for the Globe and Mail called Own the Podium is a recipe for failure.  The main contention in this article is Own the Podium’s sole focus on top 3 results is “artificial and arbitrary”. He says “If we define success in narrow metrics – that is, winning a medal – we set our athletes, and our nation, up for failure.”

I love this article and the type of debate it raises. But I also realized that the author didn’t address a critical aspect of the issue: he didn’t address the fundamental difference between Success and Victory, and how Own the Podium is fundamentally flawed if viewed in these terms.

Victory is defined in many ways in various online dictionaries, but all have a common thread.  Let’s consider the definition from dictionary.com.

“A success or triumph over an enemy in battle or war.”

Victory is a basic black or white issue, with no shades in between. It is win or lose. Own the Podium is a victory-based program, and the opponent has been defined as everyone in the world.  In their terms, victory is starkly defined as finishing in the top 3. Finishing 4th is the same as not showing up, or finishing 50th, or finishing last. It’s considered a failure.  Is this approach appropriate?  You may be surprised to find that I give medal counts a qualified yes.  Top 3 performances are the metrics to which countries are measured at major international competitions, and so counting medals is a valid international metric (although perhaps not the best one).

Success is also defined in many ways, with the common thread being as follows (dictionary.com):

“The accomplishment of one’s goals.”

Success then only requires one to set goals, but at least this allows some shading. The goals can now include something other a stark win or lose scenario. In this light, we can see that Own the Podium has incredibly strict goals. In fact, goals that are not very useful.

Why is Own the Podium not very useful?  It’s because it can’t tell the difference between a sport in Canada that is improving and is heading towards eventually getting medals, and a sport that is declining but is in or near the medals.  After all, if you only count medals, then you can’t measure the sports not winning medals. Let’s imagine a new program (we could call it Climb the Mountain or Improve or Die or some really catchy phrase) and imagine that the goals of this program were to improve our performance in every sport at major competitions.  This type of program would tend to foster a culture of excellence in our sports, and it would reward those sports that did a good job at it.

This type of program would also then be able to measure sports not presently winning medals.  In this case, consistently placing just outside the medals may be a huge improvement over the previous Olympics, and an indication that the sport is doing its job well. It would be considered a success.  Conversely, another sport may have moved down the world rankings. That would be considered a failure, and should spark some soul searching. Meanwhile, Own the Podium wouldn’t have noticed a difference in either case.

As an example, in his article Wilson points out that in Beijing our swimming relay teams finished in the top 5 in every relay race. A truly remarkable feat that shows a huge improvement over previous Olympics.  Own the Podium would consider that unimportant.

So is a victory-oriented program like Own the Podium a recipe for failure?  Basically, yes. I doesn’t necessarily allocate money towards improving sports, with long term implications for the success of those sports. And as Wilson says, those athletes who don’t win medals are considered failures. That’s unacceptable.

What should we have instead?  We should develop simple ways to determine if a sport is improving or declining on the world stage. And we should develop ways to evaluate every sports’ infrastructure, including coaching, administration, facilities and funding.  From this we can identify best practices, and the best places to spend money – most likely by monetarily rewarding the improving ones.

The other thing we need to do is separate the evaluation of the sport from the evaluation of the athlete, and this is something we are not good at doing. Often the non-medalling athletes are asked questions from the media that seem to blame the athlete for not medalling, even if they only had an outside shot at it. The questions should be put to that sports organization, not the athlete. These athletes are the best we have, doing everything they can to perform. Success for them may involve different metrics than just medalling.